Planet Terror is a 2007 American action horror science-fiction film written, cinematographied, scored, co-edited, produced and directed by Robert Rodriguez, about a group of people attempting to survive an onslaught of zombie-like creatures as they feud with a military unit, including a go-go dancer searching for a way to use her "useless talents."

In a rural town in Texas, go-go dancer Cherry Darling (Rose McGowan) decides to quit her low-paying job and find another use for her "useless' talents. She runs into her mysterious ex-boyfriend El Wray (Freddy Rodriguez) at The Bone Shack, a BBQ restaurant owned by JT Hague (Jeff Fahey). Meanwhile, a group of officials at a nearby US military base, led by the demented Lt. Muldoon (Bruce Willis), are making a business transaction with a chemical engineer named Abby (Naveen Andrews) for mass quantities of a deadly biochemical agent known as DC2 (codename "Project Terror"). When Muldoon learns that Abby has an extra supply on hand, he attempts to take Abby hostage, and Abby intentionally releases the gas into the air. The gas reaches the town and turns most of its residents into deformed bloodthirsty psychopaths, referred to as "sickos" by the surviving humans. The infected townspeople are treated by the sinister Dr. William Block (Josh Brolin) and his unhappy, unfaithful bisexual anesthesiologist wife Dakota (Marley Shelton) at a local hospital.
Random zombie attacks begin along the highway, causing El Wray, with Cherry as his passenger, to crash his truck. In the aftermath, several zombies tear off Cherry's right leg. Also falling victim, fatally, is Tammy (Stacy "Fergie" Ferguson), who was on her way to into town to reunite with her former lover Dakota. When Tammy's body arrives at the hospital, Dr. Block recognizes her and by comparing text messages on the cellular phones of Tammy and his wife, realizes Dakota was about to leave him. He then attacks Dakota with her own anesthetic syringe needles, stabbing her repeatedly in the hands, rendering them useless, before locking her in a closet to tend to other patients, including Cherry, who despite her injury does not die.
El Wray is detained by Sheriff Hague based on past encounters between the two men. As the patients transform into zombies, El Wray leaves the police station and arrives at the hospital, attaching a wooden table leg to Cherry's stump. As El Wray and Cherry fight their way out of the zombie-infested hospital, Dakota escapes to her car, but in struggling to open its door with her numbed hands, accidentally breaks her left wrist. She eventually manages to drive away. Meanwhile, Block becomes infected and others, including Cherry and El Wray, take refuge at the Bone Shack.
Dakota retrieves her son Tony and takes him to her father, Earl McGraw, a Texas Ranger. Tony, who was given a revolver by his mother, accidentally shoots himself in the face after being told not to point it at himself. Cherry and El Wray make love in JT's bedroom. Due to a missing reel, what happens immediately following this is unknown, but when the film returns, Sheriff Hague has been shot in the neck by one of his own officers, and zombies are massing outside the Bone Shack, which is set on fire. Dakota, Earl, and Tony's crazed babysitter twins arrive at the Bone Shack. With Sheriff Hague badly injured, the group decides to flee to the Mexican border, before being stopped by a large mob of zombies. Muldoon's men arrive, and kill the zombies before arresting the group. They learn from Abby that the soldiers are stealing Abby's supply of the gas because they are infected with it and the only treatment is by constant inhalation of the gas, which delays mutation. They also learn that a small percentage of population is immune to the gas, suggesting a possible treatment, which is why Muldoon quarantined the survivors.
As Cherry and Dakota are taken away by two soldiers (Quentin Tarantino credited as "Rapist #1" and Greg Kelly credited as "Rapist #2"), the others defeat the security guards. J.T. sustains a gunshot wound in the process, and the group searches for Muldoon. Discovered by El Wray and Abby, Muldoon explains that he killed Osama bin Laden before he and his men were infected with DC2 and were ordered to protect the area. El Wray offers a respectful recognition of Muldoon's military service before he and Abby shoot the mutating Muldoon.
Meanwhile, Cherry is forced to dance by Rapist #1 while being held at gunpoint. Cherry attacks by breaking her wooden leg across the rapist's face and stabbing him in his eye with the stump. Dakota, after realizing she has regained feeling in her hands, quick-draws her syringe launcher and stuns Rapist #2. El Wray and Abby arrive to rescue Cherry and Dakota, and El Wray replaces Cherry's broken wooden leg with a modified M4 Carbine with a M203 grenade launcher attachment. She promptly kills Rapist #1 and several zombies with it.
J.T., wounded and lying beside his dying brother, stays behind to detonate explosives to eliminate the zombies still in the complex while the others flee. The survivors make plans to escape by stealing helicopters but must fight past the remaining zombies. Abby dies (and hope for a cure with him) when a ballistic projectile blows his head up. An infected Block then arrives and is killed by Earl, shortly before the survivors use the blade tips of their transport helicopter to decapitate all the remaining zombies. However, while saving Cherry from a zombie, El Wray is fatally wounded. In the epilogue, Cherry (now sporting a minigun prosthetic leg) leads the group and many more survivors to the Caribbean beach at Tulum, Mexico, where they start a peaceful new society amid a world-wide zombie infection. In the final moments of the film, it is revealed that Cherry Darling has given birth to El Wray's daughter (alluded to earlier during El Wray's final scene when he puts his hand on her stomach and restates his motto "I never miss").
In a post-credits scene Dakota's son Tony is sitting on the beach at the survivor's "base" playing with his turtle, scorpion, and tarantula.

According to actress Marley Shelton, "(Rodriguez and Tarantino) really co-directed, at least Planet Terror. Quentin was on set a lot. He had notes and adjustments to our performances and he changed lines every once in a while. Of course, he always deferred to Robert on Planet Terror and vice versa for Death Proof. So it's really both of their brainchild." Tarantino has stated, "I can't imagine doing Grindhouse with any other director in the way me and Robert did it because I just had complete faith and trust in him. So much so that we didn't actually see each other's movie completed until three weeks before the film opened. It was as if we worked in little vacuums and cut our movies down, and then put them together and watched it all play, and then made a couple of little changes after that, and pretty much that was it." Rodriguez acted as cinematographer on Planet Terror, as he had previously done on some of his earlier films.

Many of the cast members had previously worked with Rodriguez. Before appearing in Grindhouse, Marley Shelton had auditioned for The Faculty, but Rodriguez chose not to cast her. She was eventually cast in the role of the Customer in the opening sequence of Sin City. Bruce Willis had appeared in Sin City. Tom Savini had previously acted in From Dusk Till Dawn, Michael Parks reprises the role of Earl McGraw, a role the actor first portrayed in From Dusk Till Dawn, and Quentin Tarantino himself appears in a small role, as he also does in Death Proof.

The film uses various unconventional techniques to make Planet Terror appear more like the films that were shown in grindhouse theaters in the 1970s. Throughout the feature and the Machete trailer, the film is made to look damaged; five of the six 25,000 frame reels were edited with real film damage, plug-ins, and stock footage.

Planet Terror makes heavy use of digital effects throughout the film, mostly for Cherry's fake leg. During post-production the effects teams digitally removed McGowan's right leg from the shots and replaced it with computer-generated props — first a table leg and then an assault rifle. During shooting for these scenes, McGowan wore a special cast which restricted her leg movement to give her the correct motion.

During pre-production, Tarantino and Rodriguez came up with the idea of inserting a "missing reel" into the film. "(Quentin) was about to show an Italian crime movie with Oliver Reed," Rodriguez recalls, "and he was saying, 'Oh, it's got a missing reel in it. But it's really interesting because after the missing reel, you don't know if he slept with a girl or he didn't because she says he did and he says that he didn't. It leaves you guessing, and the movie still works with 20 minutes gone out of it.' I thought, 'Oh, my God, that's what we’ve got to do. We've got to have a missing reel!' I'm going to use it in a way where it actually says 'missing reel' for 10 seconds, and then when we come back, you're arriving in the third act. [...] The late second acts in movies are usually the most predictable and the most boring, that's where the good guy really turns out to be the bad guy, and the bad guy is really good, and the couple becomes friends. Suddenly, though, in the third act, all bets are off and it's a whole new story anyway." 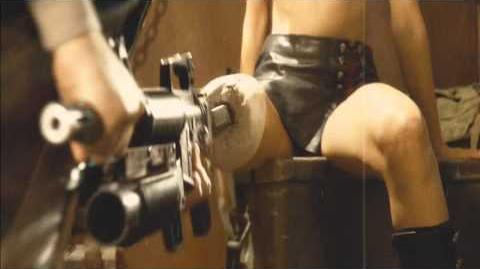 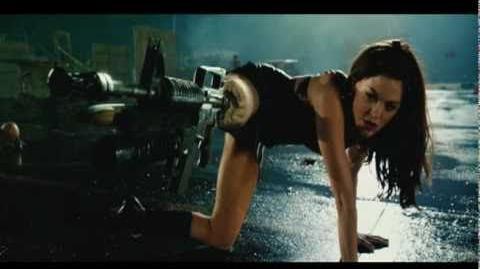 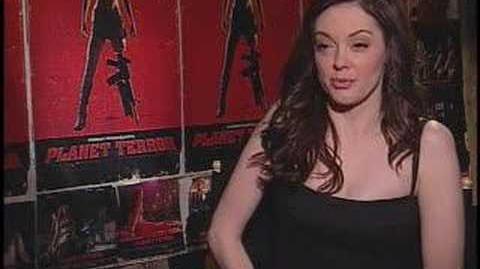 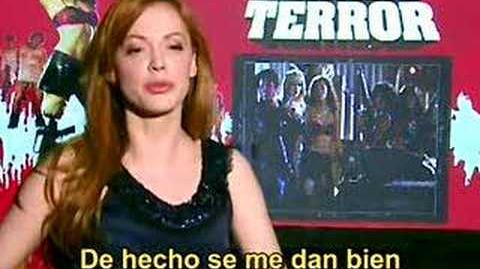 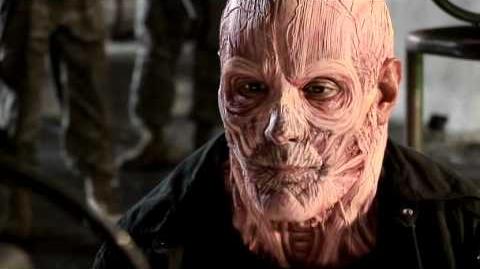 The Makeup Effects of 'Planet Terror' 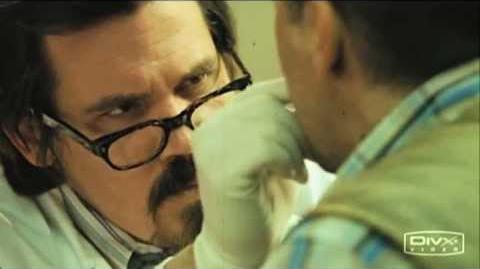 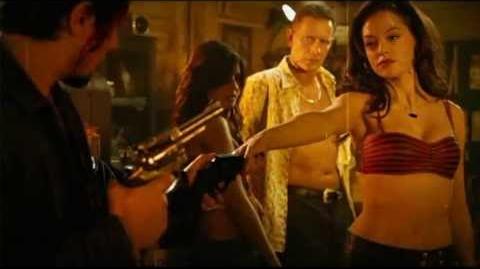 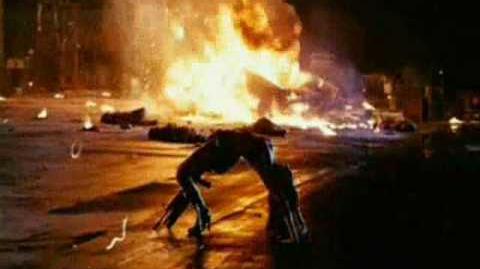 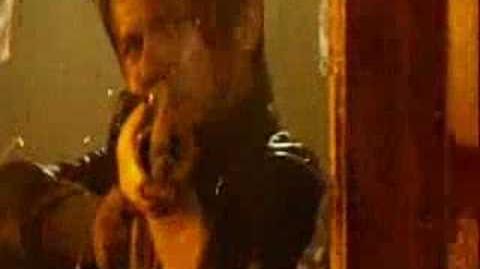 Retrieved from "https://planetterror.fandom.com/wiki/Planet_Terror_(film)?oldid=8657"
Community content is available under CC-BY-SA unless otherwise noted.