Deputy Carlos is a supporting character seen in Planet Terror.

He is portrayed by Carlos Gallardo.

He arrives a the  hospital with Sheriff Hague and Deputy Carlos to apprehend Wray. After doing so, they return to the police station. As he, Wray and Hague are inside, Tolo enters and explains that his finger was bitten off by a man he arrested at Skip's place. Carlos was sent to investigate and bring the man in. Carlos went outside to the police car and noticed that the windows are shattered so he must have escaped. Carlos sees Tolo's ring, he picks it up and as he is moments from returning it, a Sicko appears and rips off one of his arm. More appears and kills him.

It appears as he works well with fellow co-workers such as Tolo and Hague.

Carlos is sent to investigate.

Carlos looks in the car. 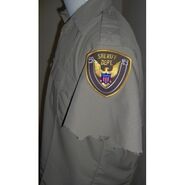 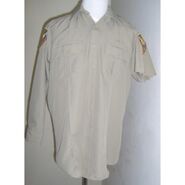 Shirt prop.
Add a photo to this gallery
Retrieved from "https://planetterror.fandom.com/wiki/Deputy_Carlos?oldid=8607"
Community content is available under CC-BY-SA unless otherwise noted.