Cherry Darling (Palomita to El Wray) is a former go-go dancer and survivor of the zombie apocalypse. After Cherry's leg is torn off by Sickos, she is given a special prosthetic leg in the form of a high powered machine gun by El Wrey. At the film's conclusion, she now leads a community made up of the remaining survivors of the apocalypse.

She is portrayed by Rose McGowan.

Not much of Cherry Darling's past is known. She was possibly born in Texas, as this is where she was shown to currently reside in during the events of the film. She had dreams of becoming a doctor and, at some point in time, was dating a young man named El Wray. Her plans to become that doctor, as well as her relationship with El Wray, both came to a dead end. Cherry would eventually become a go-go dancer/stripper. Like most strippers, that life took the piss out of her, and she became somewhat tough. With a sleazy boss like Skip and in the company of other strippers, one becomes somewhat cut throat. However, overtime she would become frustrated with her career choice, culminating in her tearing up during one of her performances, and quitting that same night.

On the way home from the go-go/strip bar, she was nearly hit by an army hummer which was part of a caravan of military hummers. She injured her leg as she fell, puncturing it with a broken piece of glass that was wedged in her leg. She walked to the nearest building which is a BBQ restaurant. In the bathroom, she tended to her wound, pulling out the glass and stitching up the wound. After she stepped out and ordered something to drink. She was sitting in the BBQ, alone. The only people to keep her company was the owner and the owner's dog, until El Wray came back into her life. They had a civil conversation. There was an attraction that was still there between the two of them. He gives her a ride home.

On the road they have a car accident when El tried to swerve away from a pedestrian. Neither was hurt in the accident. However she was pulled out and pulled into some bushes by this group of sickos(zombies). They mutilated her, pulling off her leg and running off with it when El scared them off with his assault rifle.She went into shock and didn't wake until she was at thehospital. There she found herself where her leg should be is a stub. She broke down in tears. The hospital patients and doctors were infected by some disease that made people into sickos. Cherry hid under a blanket. However she was still tearing up due to the fact that she was still without a leg.

El Wray returned to get her. He slapped on a wooden leg from a table onto her stub and rescued her from the hospital. Though-out the night they were running from these sickos with uninfected survivors. They were then captured by The military.

A few short hours later, they find out that the sickos-creating infection was created chemically from a scientist. Cherry and a doctor named Dakota Block were taken out of the holding cell and brought into a room. They were alone for a short time until the soldiers returned. They were gonna rape them.

Cherry stomped her wooden leg into one of the rapist's eye. The infection was causing one of their genitals to melt. But he was gonna try to rape Cherry anyway. El Wray and a scientist rescued them. El Wray gave cherry a M4 carbine/M203 grenade launcher combo leg. She used it to kill her rapist and a few guards. They then broke out all the other prisoners. There was a battle. In the middle of the battle, the last hope for humanity's survival, the scientist, was killed. Shortly after, El Wray was killed, but he left a message to Cherry saying that a part of him will be with her, fo

r he impregnated her. He died and tearful Cherry left with the survivors.

After the infection either killed or convert most of humanity into sickos, Cherry went around the country searching for survivors and bringing them back to Tulum, Mexico, with her and El's infant daughter. Two against the world.

Cherry and Wray were separated, but by the middle of the film, it appears as if they are back together again.

It seems as if she and Dakota became friends after the events of the film.

Skip is her former employer. It is not implied that she was ever sexually harassed by him. 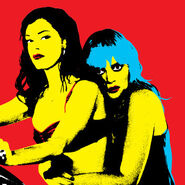 Cherry and others wallpaper.

As the film starts. 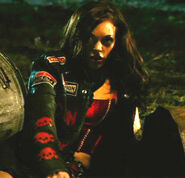 Cherry, after discovering her amputation. 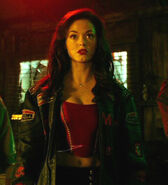 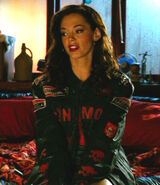 Cherry and Dakota at the bridge.

Confronted by the rapist.

Cherry gets a new leg.

Checking to see if the coast is clear.

In the air and ready to kill zombies.

Landing on the other side.

Staring at the blaze.

Cherry after killing a Sicko.

Looking at her daughter.

The End
Add a photo to this gallery

Retrieved from "https://planetterror.fandom.com/wiki/Cherry_Darling?oldid=8766"
Community content is available under CC-BY-SA unless otherwise noted.